I was on my way to photograph the Workers’ Party rally in Yishun tonight when I received a phone call from a friend. “DID YOU SEE THE NEW PAPER TODAY?!”

I had not, but since she had had such an extreme reaction, I made a point to. And this was what I read:

I was very confused to read this, and not just because of the typo in the sub-heading. In fact, I couldn’t actually believe what I was reading. And I’ll tell you why.

BECAUSE I WAS THERE. AND THIS DIDN’T HAPPEN.

I was at the SDP rally on Friday night at Jurong East stadium. I was photographing the rally for The Online Citizen, as well as live-tweeting for TOC’s updates on the main site and on the Facebook page.

I was there when the final speech was over, and all the candidates from the SDP stood on stage to wave to the people. Then Bentley, one of the MCs, said that a supporter (from Sembawang) had come, and wanted to garland Dr Chee Soon Juan. However, Bentley said that the law did not allow Dr Chee to go on stage, and so he could not be garlanded on stage for everyone to see. It was then that I posted this tweet: 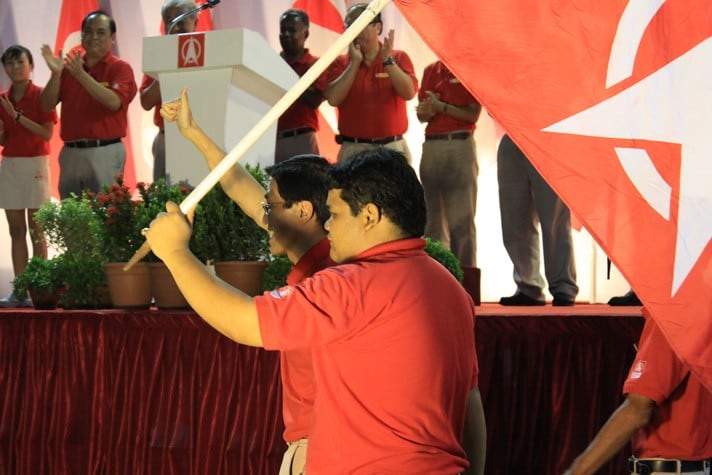 Dr Chee then came out from backstage, waving to the people. Sure, he was followed by two SDP members who were carrying SDP flags, but it was hardly a procession. How could it be? He was separated from the public by the barrier that had been put up. He smiled and waved to the crowd, because everyone had broken into cheers upon seeing him.

He was then garlanded offstage. People crowded towards him to shake hands and ask for autographs. Dr Chee was still separated from the crowd by the barrier at the time.

I bumped into some friends and we stood together chit-chatting for awhile as I waited to say hello to Teo Soh Lung, who was receiving well-wishes from everyone and autographing copies of her book. The other candidates such as Dr Vincent Wijeysingha were also there, talking to people, shaking hands, taking photographs. There was no disruption, no sign of any “antics”. 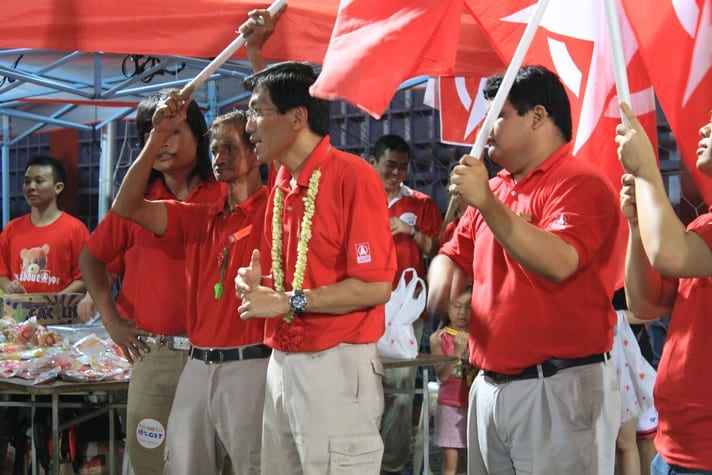 I later saw Dr Chee standing next to the merchandise stall, and photographers crowding in to snap pictures. Being a kiasu Singaporean, I joined them too, camera at the ready. There was a small crowd behind the photographers.

I guess everyone was wondering if Dr Chee was going to do anything “radical”, and I have to admit that the thought had crossed my mind. But he did not. He only said that he was not legally allowed to address the public, and then he urged everyone to visit the SDP website and look at the all the information presented there. “That’s where we can talk,” he said.

I left the rally thinking that Dr Chee had handled the whole episode quite well indeed. And I’m not the only one. This blogger evidently thought so too.

Just to make sure that I wasn’t just being incredibly blur and missing out on any blatant acts of civil disobedience, I asked on Twitter for others who had been at the rally to get in touch, so I could corroborate my story.

(If anyone else was at the rally that night, I would still love to hear from you and find out what you saw. Just leave a comment below.)

Also, I notice that TNP said that this “incident” happened after Ms Teo Soh Lung’s speech. This is inaccurate. Ms Teo was not even the final speaker of the evening; Dr Vincent Wijeysingha spoke after her. Dr Chee did not appear until after the whole rally was over.

As far as I can tell from what I witnessed with my own eyes, as well as others who had attended the rally, there were no “incidents” and no “antics”. Certainly no protest marches, or attempts for any protest marches.

So really, my question to The New Paper is this: buay pai seh ah?

Skewed reporting is one thing, and Melvin Singh* and I have had to agree to disagree on that front. But reporting that is unsubstantiated (except by “unnamed” and “anonymous” SDP members/candidates) and false is a whole other thing. It is unethical, irresponsible, and disgraceful journalism. One does not even have to be a journalist to know this.

I haven’t seen it but I understand OMY has also picked this up, taking it even further and saying that Dr Chee had insisted on going onstage to make a speech. Which absolutely did not happen. Not at the rally I attended, anyway.

SDP has issued a response on their website here, with a video by TOC of Dr Chee at the Woodlands Stadium on Saturday night. I don’t think it was that much different from what happened at Jurong East on Friday night – he was very popular and everyone wanted to say hello, shake his hand, exchange a few words.

Now, it is my turn to ask: what is TNP’s “agenda”? Why try so hard to cast doubt on the character of Dr Chee Soon Juan now, so close to Polling Day, and to make it seem like there is a growing rift in the SDP? Why go to so much effort to piece together hearsay (that could possibly have been totally fabricated as far as “unnamed” sources are concerned) to make the party look bad? Why couldn’t they just have reported the rally honestly and properly, instead of digging around for dirt?

Would TNP ever have run a story based on hearsay and anonymous sources like this about the PAP? I find it hard to believe.

Really, what sort of newspaper is TNP trying to be? The Daily Mail?!

* Just for your information, Bryna Sim and Melvin Singh, who were the two reporters on this article about Dr Chee, were also the same two people who had been involved in the headline/front page related to Vincent Wijeysingha that I had complained to The New Paper about not so long ago. See here.

After this blog post was put on TOC’s Facebook page, other comments came in from people who had been at the rally. I will continue to update this post as and when I come across new comments.

After the whole thing about the “gay MP” headline, Melvin Singh sent me the following FB note:

If you, too, would like to help keep Melvin Singh honest, please write in to him at melvin@sph.com.sg!

After many, many, many people commented on her FB page with angry complaints, these are Bryna Sim’s responses:

A fellow attendee of the 29 April rally at Jurong East has also posted this video, showing Dr Chee shaking hands and greeting people. Anyone see a protest march, or an attempt at a protest march?

Here is another video uploaded. From about 10:40 you can see the end of the rally and then Dr Chee coming out to meet people.

Which came first: Homophobia or Censorship?

I’ve just been to see I Love You, Phillip Morris. It’s a delightful, engaging film that did a great job of...

Coming out of my teens and early-20s, I thought I could finally put the angst of “finding myself” behind me....

There’s a curious breed of people out there in the world. They have no particular natural habitat; they simply live...

A letter from Professor Theodore Glasser

I have been observing – and participating in – the discussion and criticism surrounding NTU’s decision to once again reject Dr Cherian...

Thou Shalt Also Post The Truth: A response to The New Paper

There was a crazy number of notifications on my phone when I woke up this morning. Apart from the usual...

Rape and Terrorised Towns: The verdict of the Steubenville rape trial according to right-wing news outlets

MDA’s licensing scheme: So many questions, no real answers